An interview with Goose guitarist Rick Mitarotonda and multi-instrumentalist Peter Anspach is featured in Episode 74 of The JamBase Podcast, a partner of Osiris Media. Rick and Peter spoke via video chat from their homes in Connecticut with JamBase’s Scott Bernstein.

The conversation took place a week after Goose’s Goosemas livestream concert, which originated from the rooftop of a building in New York City’s Rockefeller Center. Goosemas was viewed live by over 60,000 music fans around the world, raised over $45,000 for Save Our Stages and Conscious Alliance and capped a big year for the group.

Goose has certainly been on the rise and garnered much attention as their fanbase has grown exponentially over the past two years, yet the band isn’t an “overnight sensation.” The discussion began with a bit of “Goose 101,” as Rick and Peter described the long path each took to get to where they are. Mitarotonda shared the history of Vasudo, his pre-Goose band, while Anspach shared the history of his pre-Goose band, Great Blue. Rick went on to explain how Goose was formed out of the ashes of Vasudo. Peter came aboard in 2017 and recalled his first concert with the group at Goosemas IV.

Scotty, Rick and Peter then turn their attention to Goose’s 2020. The pair discuss the addition of percussionist Jeff Arevalo and the genesis of their Bingo Tour. Anspach revealed the role a “Bingo Guy” played in the inventive virtual tour and how the band picked the site that hosted the run. Rick and Peter then talk about the drive in shows Goose played this year with Anspach detailing one the best moments he’s ever had as a musician.

Rick and Peter go on to discuss the conditions that led Goose to postpone their Halloween Weekend concerts in Morris, Connecticut and how that changed the band’s gameplan for their Donnie Darko-themed show. Other topics hit upon were Goosemas, the long-awaited follow-up to 2016’s Moon Cabin LP, an addition to Peter’s rig, thoughts about changing the band’s name and more.

This episode is sponsored by Bellion Vodka. Created with NTX Technology, Bellion Vodka is a new kind of spirit. The additive Bellion is distilled with – NTX – has been the subject of half a dozen academic studies and featured in three peer-reviewed journals. It’s heavy-bodied for a vodka, which enhances any drink’s mouthfeel. Long story short, it’s possibly better for you and definitely not worse! Bellion Vodka can be ordered online and shipped to your door within seven days. And, until the end of the year, you get $1 shipping on all orders of two (2) bottles or more. Go to Bellionvodka.com and order yours. It makes a great holiday gift!

The episode is also sponsored by SYNLAWN, the largest manufacturer of artificial grass in North America. SYNLAWN manufactures highly durable, environmentally friendly, USDA Bio-based Certified synthetic grass. SYNLawn is great for residential use, on playgrounds, roofs, agility training, golf and many more projects. With SYNLawn you can have green grass year-round — even in the spots where it won’t normally grow. Visit www.synlawn.com/ to learn more.

Listen to Episode 74 of The JamBase Podcast below or through all major podcast services including Spotify, Apple Podcasts, Stitcher and Google Podcast:

Episode 73 of ‘The JamBase Podcast’ features an interview with Jonathan Wilson who talks about his 2020 album ‘Dixie Blur,’…

Hear an interview with Bahamas (Afie Jurvanen) on Episode 72 of ‘The JamBase Podcast.’

Stream an interview with The Revivalists frontman David Shaw on Episode 71 of ‘The JamBase Podcast.’

Listen to an interview with Hiss Golden Messenger’s MC Taylor on the latest episode of ‘The JamBase Podcast.’ 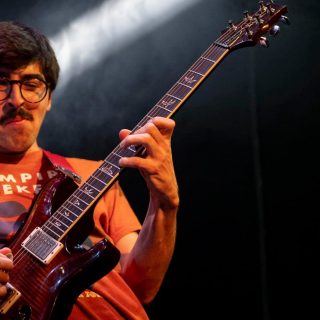 Today I’m bringing you an interview with Goose’s Peter Anspach, about their upcoming really innovative Bingo Tour. You can learn…