Make no mistake, Kenny Roby has turned in one of the most emotional and raw records of 2020. But listening to his fifth solo album The Reservoir, it is impossible not to feel solace. When he sings in the album opener “Don’t Ya Know What’s On My Mind”, “My mama told me I was special/ She never saw me in the dark/ A soft truth and a wet confessional/ Dressed in a mess and double parked”, you know right away that there’s going to be trouble ahead, and real soon. But Kenny’s voice is so reassuring, his music so assuaging, that you know it is all going to be okay in the end.

As this album began, circumstances were most definitely not okay in Kenny Roby’s world. Many things came to an end for him in 2019: the lives of friends and family, his marriage, his time in the Carolinas. And looming large, especially for this record, was the loss of his longtime friend and musical partner Neal Casal. Already in the beginning stages for Kenny’s album (which was originally to take the name of probably its most uplifting song, History Lesson), the project was upended in late August when news came that Neal had taken his own life.

As heavy as all of that was and is, the result is a revelation. As awful as it sounds to take the journey that Kenny Roby took, the destination is all the more alluring. Listening to The Reservoir is to witness what it is like to go through great hardship and come out with balance and calm, and even manage to keep a sense of humor.

In this episode, you will hear conversations with the native South Carolinian, who now lives in Upstate New York, as well as Dave Schools, who picked up production duties on The Reservoir after Neal Casal’s passing. Three of the sixteen songs in the collection find their way into the podcast as well, along with a flashback to the 1994 debut of Kenny Roby’s former band 6 String Drag.

Thanks for dropping by Southern Songs and Stories, and I hope you might tell someone you know about the series. You can subscribe to the podcast on Apple Podcasts, Spotify, TuneIn, you name it. And once you subscribe, it really helps when you give it a good rating and a review. Southern Songs and Stories is a part of the podcast lineup of both public radio WNCW and Osiris Media, with all of the Osiris shows available here. You can also hear new episodes of this podcast on Bluegrass Planet Radio here. – Joe Kendrick

“Akabanah” by Kodo from Ibuki (excerpt)

“Vampire Song (Whatcha Gonna Do)” by Kenny Roby from The Reservoir

“Just Because” by Kenny Roby from The Reservoir

Grass That Goes Against the Grain: Wood & Wire

There’s a lot of incredible stuff this week, and we hope you all get to listen to all of these… 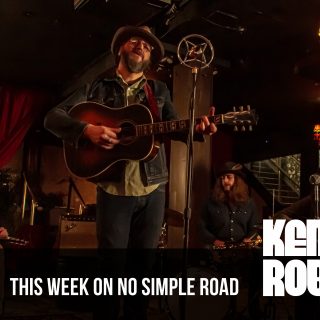 166 – Filling Up Reservoir With Kenny Roby

This week on No Simple Road we welcome Kenny Roby! Kenny knew from the start there would be a lot…

Lots of new stuff for you today. Hope you enjoy, and have a great weekend! Bob Weir, Melvin Seals and Mountain…