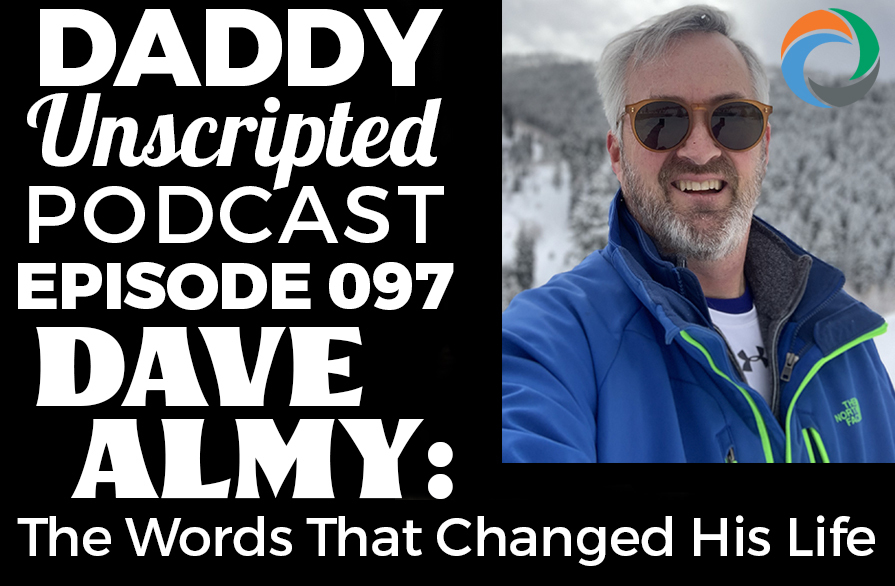 Episode 97 is a bit of a rollercoaster episode with Dave Almy. A very honest and real conversation, that has a lot of laughs and an almost equal number of moments that cause to take great pause. This episode was recorded almost exactly 2 years ago. I continued to hold this for the right time and that time is now! It’s finally ready to be out here for your consumption.

I’m gonna give a quick shout-out to previous guest of the podcast: Bruce Mendelsohn, for connecting Dave and me for this conversation. Thanks Bruce!

Dave comes from an interesting family dynamic, himself. His parents divorced when he was very young and his Dad married his stepmom in the years following. It’s really good to hear about how great his stepmom was and what a wonderful woman and parent she has been in his life. And, yes, I understand that I say that as someone who didn’t have step-parents and may be kind of influenced by the cliché of the evil step mom or dad.

With all of that said, Dave’s description of his biological Mom is really something else. He talks about how massively entrepreneurial she is and of her constant reinvention of herself in the likely nevernding plight for constant mental stimulation. He admitted that this is definitely a trait that he got from his Mom.

The story of cancer taking Dave’s Dad was extremely similar to the story of my own Father. It really hit home for me and this particular part of maybe his final visit with his Dad in the hospital, where he recalls his Dad saying to him in a moment of clarity:

“What was I doing chasing the almighty dollar when I should have been home with my family?”

Those are the last words that Dave’s Father spoke to him before he died. Read them again. As Dave said a bit after quoting that to me: “…going away from that and reflecting on it as my kids were born; that’s been the phrase that has… it’s just burrowed into me…”

I really hope you all enjoy this episode, that you get a lot out of it, that you are inspired by it. I got all of that and more, myself.

You can listen to this conversation by finding the Daddy Unscripted podcast, wherever you listen to podcasts (Apple, Spotify, Stitcher, Tune In Radio, etc).

As I say in each episode: for anyone who may need help during any difficult times: the National Suicide Prevention hotline: (800) 273-8255. Also, I have a Google Voice Number for ANY of you to use: (872) 444-6784. Leave me a message there and I will get in touch with you… or you can even just use that as a safe place to vent or whatever it may be.

Daddy Unscripted can be found on:

Daddy Unscripted is proud to be a part of Osiris Media! You can check out the Osiris Media website to see what other great podcasts are part of the network by going to OsirisPod.com. Osiris is partnered with JamBase and JamBase empowers music fans everywhere to go see live music. You should check them out at Jambase.com.

Intro and Outro music proudly provided with a partnership…

Help! We Have A Teenager!

Never Too Late To Live

Destini Manifests Kindness For All