Episode 62 features a semi-lengthy and fully beautiful conversation with Bill Protzmann, a man with a unique and fascinating life story. The common thread weaving through Bill’s entire life is music. And it’s music that literally saved his life, some nearly 12 years ago now.

Bill and I started talking and I could quickly tell this was going to be another great discussion. I won’t deny it, there have been times when I’ve second-guessed the idea of doing all of these "interviews" unscripted. So many of my guests, unknowingly, remind me why I don’t plan any of these conversations out, though.

Bill has been playing piano since he was 3 years old. His Mom was a teacher and he was actually her first student. As a self-proclaimed difficult child, Bill sees how much playing the piano helped give him some direction and force some of the engagement that assisted with his development.

Though he didn’t realize it at the time, Bill knows now that he was very depressed as a kid. This was something he worked through in different ways in his adult years, as he started to recognize it and gain some self-awareness.

In his 30’s, Bill discovered that his Father’s Father had actually taken his own life. He became curious whether there was a trait that was passed down that perhaps led to Bill’s own dealings with depression and suicide.

"It’s [suicide] also a part of my family history. Maybe it’s part of more family histories than we really know. It’s not something that people talked about until recently. So, it’s good we’re talking about these things because it makes them less terrifying… less of a stigma."

We talked a lot in this conversation about feelings and emotions. There is definitely a stigma or an idea of "bad" placed on so many of our natural human emotions: sadness, anger, etc. Bill and I agreed that experiencing the full spectrum of human emotions is absolutely healthy. It’s what you do with them that is the important part.

During this episode, we inserted two different sections of music. The first is an actual recording Bill made for this episode of playing "Till There Was You" on the piano. The song was originally in the musical "The Music Man" and was a part of a medley that Bill used to perform publicly. When he told of one such, very moving and meaningful, performance, it only became obvious that it would enrich the episode by including it.

The other song you’ll hear is the Etude-Tableau In A Minor, Op. 39, No. 2, written by the great Rachmaninoff. This is the piece of music that effectively saved Bill’s life back in 2007. The story Bill tells of the fateful night that he was deciding to give up on life is as real as it gets. Episode spoiler alert: Bill LIVED! Is that a spoiler? Maybe not. But, I am absolutely delighted to say that he is still breathing.

A bit of a surprise here: this is actually the first time I’ve talked about my own suicide attempt at all on the podcast. I’m actually maybe more surprised by that than any of you. I consider myself an extremely open book, so there’s really no good reason that I haven’t talked about it. So, I was actually all in for finally opening that part of my life on the podcast.

A lot of the men in the Protzmann family served in some form of the military. Unfortunately, Bill’s poor vision kept him from becoming a pilot like he had wanted to. However, late in the 2000’s, Bill found another way to serve: by helping veterans.

So, Bill decided to do with music for others what it had done for him. He chose to take the music they love to give them a way to find peace and inspiration. He has seen how music can change the landscape of physical, mental, emotional, and even spiritual self care. He’s gone beyond just making this a part of veterans’ lives to also using it with homeless people.

And, hey… I didn’t even mention his book! It is in my shopping cart on Amazon still… but you should look it up, too. It’s called More Than Human: The Value of Cultivating the Human Spirit in Your Organization.

Daddy Unscripted can be found on:

Intro and Outro music proudly provided with a partnership by Umphrey’s McGee.

You can send questions and suggestions for future guests to us via email to daddyunscripted@gmail.com 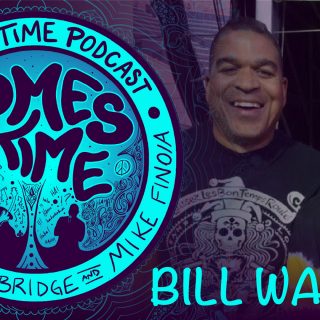 “I just love reading about adventure and about history, biography, about why people succeed in life. And one of the…

Episode 88 features Damon Miller, a CEO and longtime surfer from Oregon. This is another blast from the past episode,…

The “guest” in Episode 69 is actually me. It’s me talking about suicide, including the story about the night I…

Aaron’s Life Has Been No Simple Road

Episode 67 features Aaron of one of the fellow Osiris Media network podcasts: No Simple Road. I’m so incredibly proud…

WHAT Makes Jess Rosado Feel Like An Odd Bird Out?

The Her-Story of Rebekka Guðleifsdóttir, Pt. 2

The Her-Story of Rebekka Guðleifsdóttir, Pt. 1