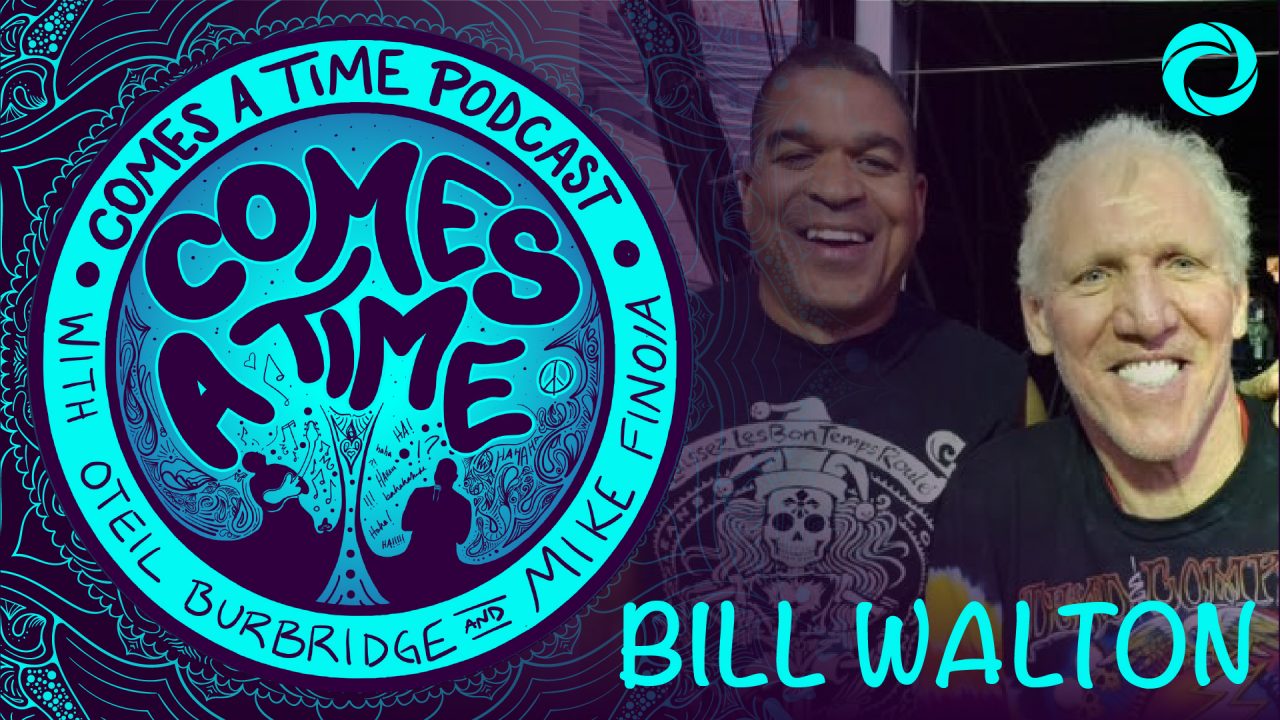 “I just love reading about adventure and about history, biography, about why people succeed in life. And one of the overriding themes on the path to success is that as we’re all chasing this dream, that when we come to the hurdles, when it seems like it’s not going to happen, when the adversity is just overwhelming and just crushing us, somebody, some complete stranger will just come into your life, then all of a sudden give you that little boost, give you the edge, hand you ten dollars, open his hand, come with me. And that and that is what the Grateful Dead is all about.” – Bill Walton

In this episode of Comes a Time, Mike & Oteil are joined by the legendary former basketball player, sportscaster and beloved Deadhead, Bill Walton. Like the force of energy that he is, Bill takes the lead in the conversation, sharing stories about his mentors through his athletic career, the creative and exploratory environment of his childhood home, and finding purpose and possibilities through the Grateful Dead music and culture. Bill talks about his first Dead show in 1967 at 15 years old, when he says “I don’t remember how we got in, because we didn’t have any money, but somehow we got up to the front row, and I never left.” Bill unexpectedly (or perhaps, exactly as expected) turns the tables and interviews Oteil, at which point we go deep on Oteil’s singing career, transitioning between bands, camaraderie in Dead & Co, and the possibility of bringing his afro back. The three also discuss Oteil’s, Steve Martin’s and Jerry Garcia’s banjo playing. On a more serious note, but equally inspiring, we hear about Bill’s long and arduous journey of learning how to speak, starting at age twenty-eight, after suffering a lifelong speech impediment, for which he now coaches young people with the same issues.

Bill Walton was born in downtown San Diego. The family quickly moved to La Mesa, The Jewel of The Hills, where his Mom, Gloria, still lives, in the same house now, for 67 years. He exploded on the international basketball scene while attending Helix High School. Bill went to UCLA as a scholarship player for John Wooden, winning three successive NCAA Player of the Year awards and helping UCLA to consecutive undefeated NCAA championships (1972, 1973), and a record 88-game winning streak. Bill is a member of the NCAA All Time Basketball Team. Bill was selected as the #1 overall pick in the 1974 NBA Draft. Walton and the Portland Trail Blazers won the NBA Championship in 1977, earning the NBA Finals MVP award that season. He was the NBA MVP the next season. Bill won another NBA title, playing with the Boston Celtics in 1986. He was named the NBA 6th Man of the Year that season. Bill is a member of the NBA All Time Team. Walton was inducted into the Basketball Hall of Fame in 1993. Bill is also in numerous other Halls of Fame, including the HOF of USA High Schools, The NCAA, the NCAA Academic All America, for UCLA, Pac-12, Oregon, San Diego, California, New England, the Boys & Girls Club, Guinness, and the Grateful Dead.

When Bill could no longer play basketball, he started a most unlikely career as a multimedia broadcaster, a career that has now spanned 30 years. Bill has worked for every major network and platform, and has been with ESPN for many years now. Bill is a multi-Emmy Award winning on-air talent. Bill is also a New York Times Best Selling author, with his memoir, Back From The Dead. Bill is a huge music fan, and with…