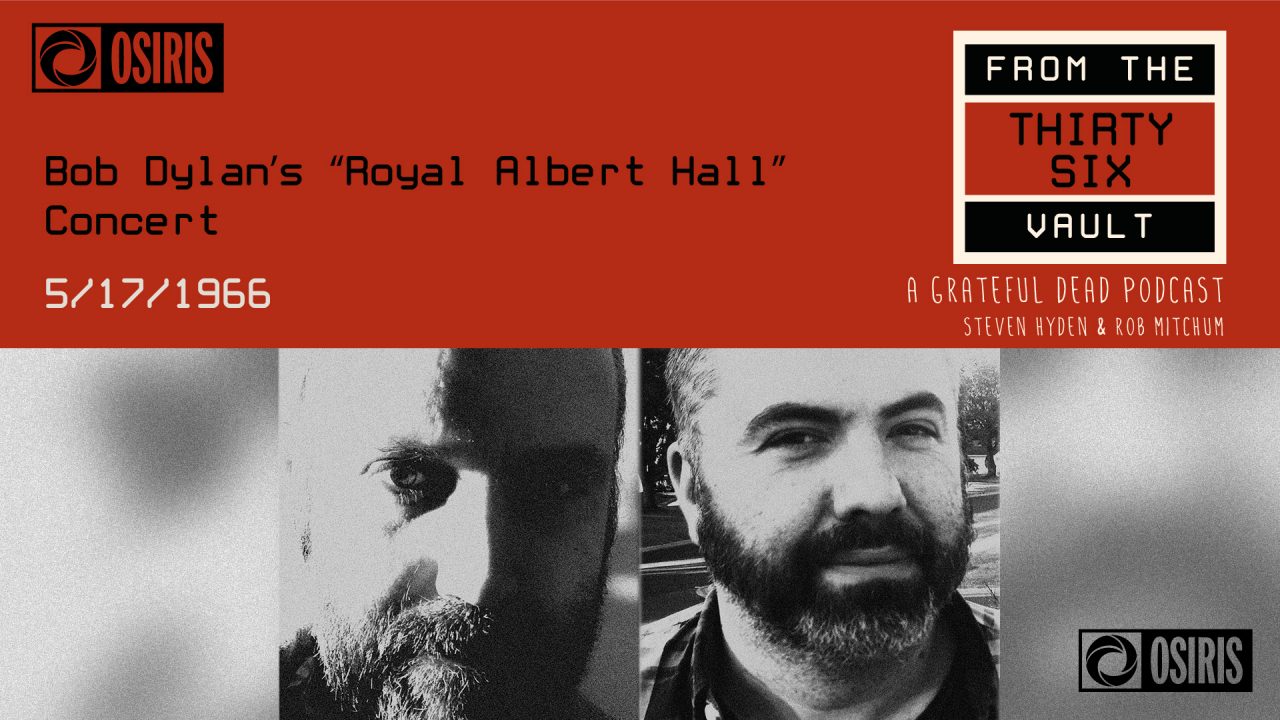 In this week’s episode we take a momentary pause from our march through the Dick’s Picks series to discuss one of the best (some would say the best) live performance of all time: Bob Dylan & The Hawks 05/17/1966 concerts from the Free Trade Hall in Manchester, UK, known throughout history as the “Royal Albert Hall” Concert. Catching Dylan in the midst of a creative peak, just weeks prior to the release of his monumental album, Blonde On Blonde, and just months before he’d disappear from live performances for 8 years, it’s an incredible peek into an artist challenging the norms of his era, battling with an audience of imbeciles, and playing some of the best rock & roll ever made with The Hawks.

Disc One is a complete acoustic set, which shows Dylan playing songs from Bringing It All Back Home, Highway 61 Revisited, and the yet-unreleased Blonde On Blonde. Every song has a claim for The Greatest Dylan Song of All Time, but highlights are found in the languid “Visions Of Johanna,” the haunting “It’s All Over Now, Baby Blue,” the wild and atonal “Desolation Row,” and the stunning energy in “Mr. Tambourine Man.” Disc Two opens with stray guitar riffs before launching into “Tell Me, Momma.” From there we’re off. One of the greatest sets of rock & roll ever played. Reworking old songs like “I Don’t Believe You (She Acts Like We Never Have Met,” “Baby Let Me Follow You Down,” and “One Too Many Mornings” as well as blasting tunes from his latest releases, “Just Like Tom Thumb’s Blues” and “Leopard Skin Pill-Box Hat,” Dylan battles his audience for the whole set, chastising them “It used to be like this….now it goes like that….” “…If only you wouldn’t clap so loud…” and forcing some of the best rock music ever played upon their ears. The boo’s are hurtled from afar from a crowd of fucking morons who want Dylan to be the Dylan they want them to be, and all the while the band plays louder and tighter and groovier. The set peaks following a searing “Ballad Of A Thin Man” with an audience member calling Dylan “Judas!” before Dylan responds with: “I don’t believe you….you’re a liar,” before instructing The Hawks to “Play it fucking loud!” They do just that, and one of the greatest versions of “Like A Rolling Stone” is unleashed on the world.

The show is an absolutely stunning picture of Dylan, who, at 24, was at an early creative peak – some would say his highest – and on the tail end of a 18mo dive into amphetamine abuse. Strung out, exhausted, angry, but writing some of the best music he ever will, he combines all of this into a dual performance, acoustic/electric, that showcases the sheer genius of Dylan, and the lasting legacy of his craft.

Please consider reviewing this podcast on <a…