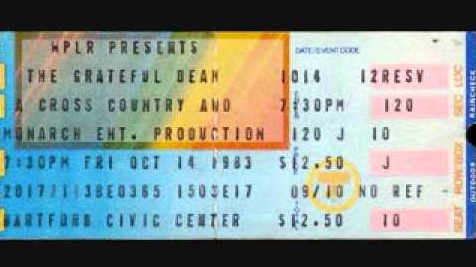 Welcome back to 36 from the Vault! In Episode 6 we explore Dick’s Picks Vol. 6, from the Hartford Civic Center in Hartford, CT on October 14, 1983. A bit of a blind spot in larger Dead History, we find the band in the middle of a successful Fall Tour, where their sound has evolved significantly since their initial peaks in the 1970s. While Set I fails to lift off in the way many initial sets had in the Dick’s Picks series thus far, the Second set is uniquely strong, featuring the first “Scarlet Begonias -> Fire On The Mountain” released yet in the series. From there, the band moves through “Estimated Prophet” before a wild and spacey “Eyes Of The World” highlights the set before moving into “Drums -> Space.” The final peak of the show comes in an emotive “Stella Blue” that set the standard for many A-late Set II 80’s comedown.

Steven and Rob focus on the static nature of the early-80’s in Dead history, discussing their relationship to popular acts of the time like Talking Heads & Dire Straits, the side projects that dominated much of this time, and the health issues that began to creep into the band.

Please consider reviewing this podcast on Apple Podcasts, or wherever you get your podcasts. We invite you to listen to Phish’s show on April 3, 1998 in anticipation of our next episode on April 8.