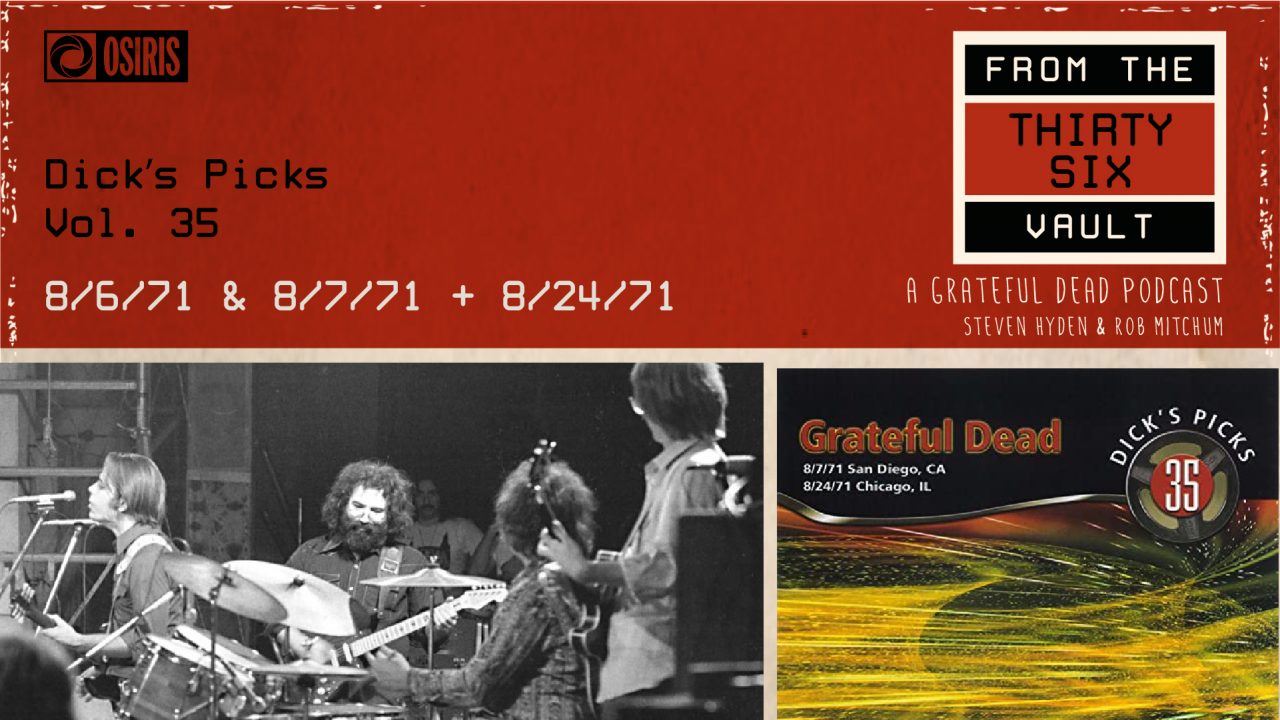 In this week’s episode of 36 From The Vault, we visit 1971 for the very first time since Dick’s Picks Vol. 2, for a very special set of shows, unheard of by any fan until 2005. Featuring the complete shows from 8/7/71 in San Diego, CA and 8/24/71 in Chicago, IL, along with snippets of 8/6/71 in Hollywood, CA, it’s a fascinating peek into the evolving nature of The Dead on the cusp of their 1972 renaissance period.

Disc One features the complete first set from 8/24 + the “Truckin’” Set II Opener. Disc One is highlighted by a brilliant “Hard To Handle,” making its Dick’s Picks debut. On Disc Two we hear a tight take on “China Cat Sunflower -> I Know You Rider” plus a stunning “Sing Me Back Home.” The highlight might very well be the incredible jam out of “Going Down The Road Feelin’ Bad” which then segues into “Johnny B Goode.”

Disc Three picks up the thread in Chicago and features a gorgeous cut of Pigpen’s “Empty Pages,” alongside a still-in-progress “Brown-Eyed Women.” Later, “Not Fade Away -> GDTRFB -> NFA” shines in the fusion between country jammin’ and punkish psychedelia.

Disc Four closes the set with a segment from the 8/6 show in Hollywood and features some of the only improv of the set in the way of “The Other One -> Me & My Uncle -> The Other One.” A haunting “Morning Dew” leads to a 25min “Lovelight” closer which shines a light on the wonders of Pigpen in the twilight of his life.

Please consider reviewing this podcast on Apple Podcasts, or wherever you get your podcasts. We invite you to listen to Dick’s Picks Vol. 36 in anticipation of our SERIES FINALE episode which will drop on Monday, August 15!