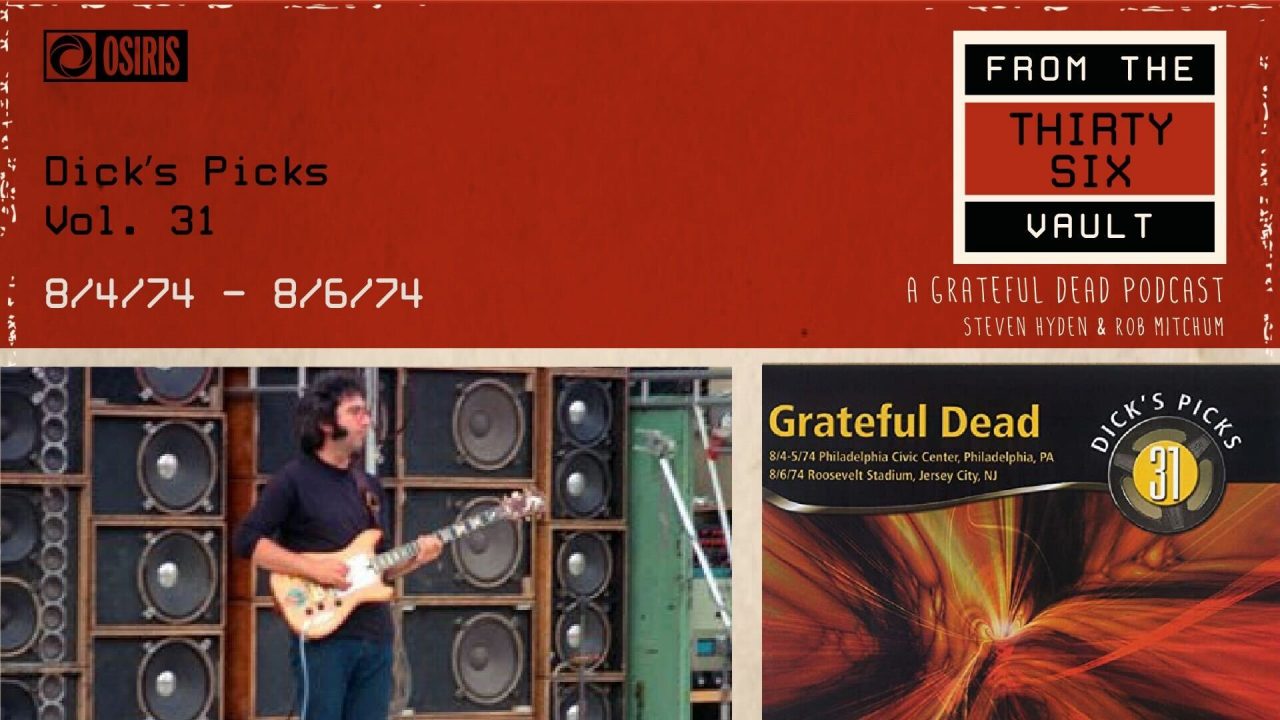 In this week’s episode of 36 From The Vault we find the band playing a Sunday – Tuesday run in late-Summer 1974. The jams are deep, the country is in turmoil, and idiots are climbing the fence. This volume hears The Dead at perhaps their most exhausted, two months shy of their hiatus, but willing to explore the outer realms of their musical ideas. Like two of the three previous ‘74 Dick’s Picks, this one works like a playlist, capturing some of the best – and some of the most questionable moments – of the mid-Atlantic run.

Disc One begins with a wild 25min dive into expansive 70’s Miles jamming by way of “Playin’ In The Band”  before moving into a groovy “Scarlet Begonias.” Elsewhere “China Cat Sunflower -> I Know You Rider” shows off its 1974 breezy jamming. Disc Two is highlighted by a mellow “Weather Report Suite” which then moves into a jam proper that, while not as extended as the Dick’s Picks 12 version, still highlights the sense that anything could be jammed amidst the Watergate scandal.

On Disc Three we hear a stunning “Mississippi Half-Step Uptown Toodeloo -> It Must Have Been The Roses” segue. Later, we hear “Truckin’” take over the set through a vast jamming segment that touches on “The Other One” and “Space” before moving into a gorgeous “Stella Blue.” Disc Four is in the running for the best Discs of the entire Dick’s Picks series. One of the greatest “Eyes Of The World” ever kicks us off before moving into a 38min “Playin’ In The Band -> Scarlet Begonias -> Playin’ In The Band” and then finally, “Uncle John’s Band” closes us out. It’s a stunning release for jamheads and a vivid picture of The Dead at the end of their hallowed 1972-1974 single drummer run.

Please consider reviewing this podcast on Apple Podcasts, or wherever you get your podcasts. We invite you to listen to Dick’s Picks Vol. 32 in anticipation of our next episode, which will drop on Monday, June 6!