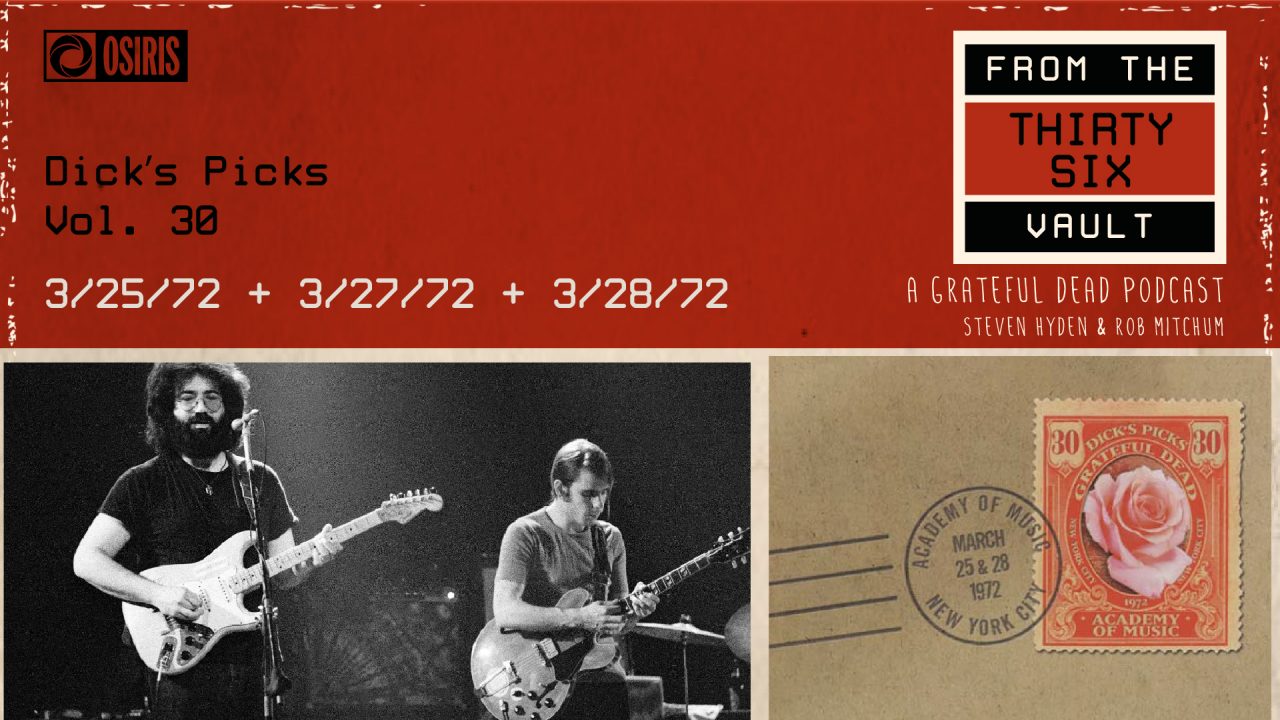 In this week’s episode of 36 From The Vault we find the band prepping for their Europe ‘72 tour with a run of shows at the Academy of Music in New York City. Featuring a set with Bo Diddley, this volume highlights the emergence of Keith Godchaux in the band + showcases some of the best Pigpen we’ve ever heard through the Dick’s Picks series.

Disc One features the majority of The Dead’s set with Bo Diddley on March 25. Showcasing their brilliance as a backing band, we hear them dip into the Blues for perhaps the last time in the 70s. Highlighted by a stunning “Jam” between Diddley and The Dead we see an alternate path for the band + their ability to linger in a variety of American styles throughout their career. The disc ends with a few one-off covers for the band + an excellent “Playin In The Band” from March 27.

The final three discs encompass the entire May 28th show. Featuring a number of rarities through the Dick’s Picks series, it’s a great peek into the band during this period. On Disc Two, Pigpen shines on “Chinatown Shuffle, “Mr. Charlie,” and “Next Time You See Me.” Jerry’s vocals on “You Win Again” showcase his ability to be as much a Blues man as he is a psych master, and “Cumberland Blues” rivals the version on the Europe ‘72 release. On Disc Three we hear perhaps the greatest “Looks Like Rain” ever played, plus we hear another excellent, early cut on “Playin In The Band,” before Pigpen highlights his emotional side with “The Stranger (Two Souls In Communion).” Disc Four displays the band’s experimentation with a lengthy “The Other One,” before closing the set out with a laid back “Not Fade Away -> Going Down The Road Feelin Bad -> Not Fade Away.” It’s a great snapshot of The Dead ahead of a transformative period in their career. By year’s end they’d be a completely different band.

Please consider reviewing this podcast on Apple Podcasts, or wherever you get your podcasts. We invite you to listen to Dick’s Picks Vol. 31 in anticipation of our next episode, which will drop on Monday, May 23!